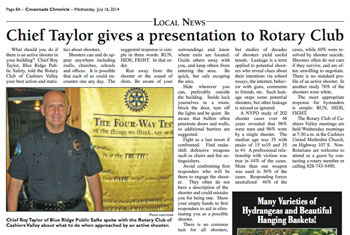 What should you do if there is an active shooter in your building? Blue Ridge Public Safety Chief Roy Taylor gave a presentation to the Rotary Club of Cashiers Valley about this and other similar emergency situations, including current statistics and the best courses of action to take.

Shooters can and do appear anywhere, including malls, churches, schools and offices. It is possible that each of us could encounter one any day. The suggested response is simple: RUN, HIDE, FIGHT. In that order.

Run away from the shooter or the sound of shots. Be aware of your surroundings and know where exits are located. Guide others away with you, and keep others from entering the area. Be quick but safe escaping the area.

Hide wherever you can, preferably outside the building. Inside, lock yourselves in a room, block the door, turn off the lights and be quiet. Be aware that bullets often penetrate doors and walls, so additional barriers are suggested.

Fight as a last resort if confronted. Find makeshift defensive weapons such as chairs and fire extinguishers.

Avoid confronting first responders who will be there to engage the shooter. They often do not have a description of the shooter and could mistake you or someone else for being one. Show your empty hands to first responders to aid in eliminating you as a possible shooter.

There is no standard profile of an active shooter, but an NYPD study of 202 shooter cases over 46 years revealed that 96% were were men and 96% were by a single shooter. The median age was 35 with peaks of 15 to 19 and 35 to 44. A professional relationship with victims was true in 44% of the cases. More than one weapon was used in 36% of the cases. Responding forces neutralized 46% of the cases, while 40% were resolved by shooter suicide. Shooters often do not care if they survive, and are often unwilling to negotiate. In another study, 76% of shooters were white.

This article originally appeared in the Crossroads Chronicle on Wednesday, July 16, 2014. 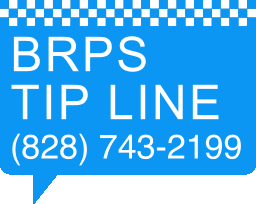 or click here to
Send Us an Anonymous Tip